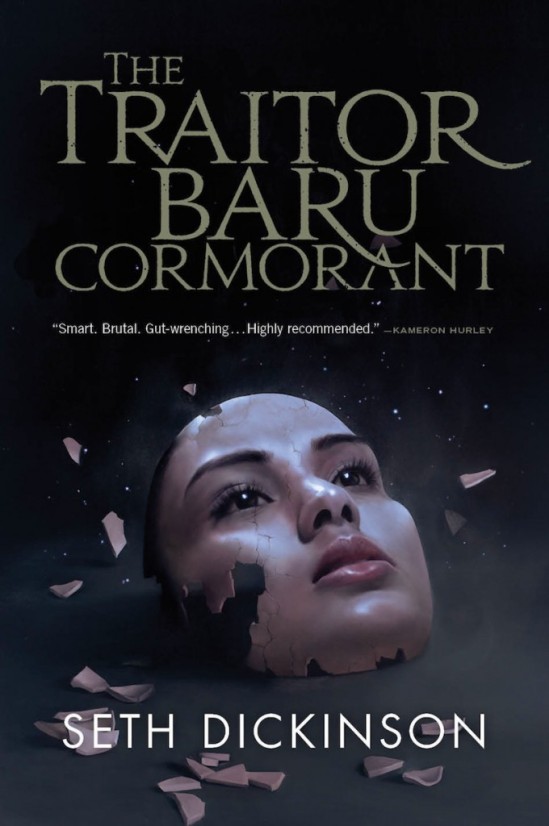 Bold, challenging, brutal, and demonstrates the author’s total commitment to telling an amazing story. It might have an accountant as a protagonist, but this is first rate fantasy.  Few debut novels are as hard hitting and brilliant.  One of the best novels of 2015.

Before I get started on this review I just wanted to say that you should read this book.  Seriously.  Just read it.  Stick with it from beginning to end.  Then, once you are done, take those few moments of quiet and think about what you just read.  This is a stunning novel, brutal and beautiful in equal measure.  Smart, intelligent and powerful.  Thought provoking and entertaining.  This will become known as one of the classics of fantasy literature, a feat made even more impressive because it is a début.  So, read it all the way through to the end.  Although, fair warning, you will probably love it and hate it in equal measure, but hate it in the way that means you were enthralled by it and it has gotten under your skin.  Love it because it is unexpected, unconventional, and has an emotional resonance that goes to your very core.  This isn’t a cosy fireside fantasy. This isn’t an easy ride of heroic quests.  This is the type of fantasy that challenges you, changes you, and leaves you wrecked, shivering, and wanting more.

The Traitor Baru Cormorant seems like it shouldn’t work, or at the very least it should have been science fiction rather than fantasy.  A fantasy novel about an accountant/mathematician working on behalf of the evil empire (the Masquerade/Empire of Masks) that colonised and destroyed her homeland idyll of Taranoke, and damns her sexuality as an aberration isn’t your typical approach to epic fantasy.  Sure, Glen Cook’s Black Company took the point of view of the side of the bad guys, but they were mercenaries and engaged in battles, Traitor is something different.  A story about and using imperial economics and logistics seems a far cry from tales of derring-do.  It has a focus on imperialism and colonialism as an island of indigenous people are brought under the heel of an empire not by invading armies and cruel warriors, but that uses trade, education, healthcare, and law to conquer.  This seems at odds with the usual expectations of fantasy.  There are no hordes of orcs and dragons, there are no cackling evil overlords spinning ridiculous plans for world domination.  In fact there is a suspicious lack of common fantasy tropes.  No magic, no mythical monsters, no ancient prophecies.  Instead, Dickinson focuses on the scariest monsters of fantasy, humans.

Traitor possesses a chilling and truly frightening vision of an imperial bureaucracy that is slowly taking over the world through deliberate trade and social strategies to wipe out resistance and assimilate the survivors; slowly, incrementally, inexorably… inevitably.  One need only squint slightly at the pages to see real world parallels that are being invoked and critiqued.  This is an intelligent look at the inner monster of humanity, at the darkest parts of our psyche, and how it becomes manifest, not just in overt conflicts fuelled by warmongering invective, but in the insidious indoctrination of our minds by racism dressed up as civilisation.  That the dangers of our world are not always obvious, and that the most powerful tools of a conquering force are not necessarily its armies.  At its heart, this is a story about how manipulation of culture is one of the most sinister tools of colonial expansionism disguised as progress, aid, and civility.  And how the moral imperatives of society bear a human and individual cost.

While Joe Abercrombie and George R.R. Martin are famous for their bleak, violent, and dark fantasy worlds, Dickinson takes that theme and applies it in a new way.  Just as cynical and grim, he lays out a world in which heroes and individuals are seemingly powerless against faceless political forces.  Where rebels are outmatched and fighting against the odds.  Where battle is present.  But Dickinson focuses more on the actions behind the scenes.  The manipulation of armies and conflicts through controlling their food, their resources, and the logistics of battle.  Far from being tedious, this is a fascinating look deeper into the old adage of armies ‘marching on their stomachs’ and brings that area of conflict into dramatic relief.  Wars are fought in many arenas, and Traitor brings this one to the fore.  But this shift in focus comes at a price.  In terms of pacing and of the story itself, so much hinges on the last few chapters.  As a result, this is not a high octane read, and some might find that the book is a little too sedately paced and not quite gripping enough, but, like a murder mystery, the true strength of this lies in the ending.  It is an ending that lands like a sucker punch to the depths of your soul.

The hero, Baru Cormorant, is a young mathematical savant with shades of Asperger’s.  Raised on the rural island of Taranoke by her mother and her two fathers, she has an idyllic childhood counting the stars and being part of a community that has its own way of life.  That is until the Empire of Masks arrives.  Through a manipulation of trade and currency the Masquerade slowly encroaches into and changes Taranoke… for their own good of course.  Making them into a subject nation.  Making them more civilised.  Making them into model citizens of the new world.  Baru is educated by the Masquerade, and becomes a star pupil.  The novel tracks Baru from her childhood, through the school system with its teachers and odious indoctrination.  It investigates her relationships with her parents and friends, and how they change due to her rise through the ranks of the Masquerade.  In part, Traitor is a coming-of-age narrative as much as it is a story about colonisation and imperialism.

Added to all of this is a consideration of hetero-normativity and a challenge to its supremacy.  Baru, like many of the people of Taranoke, has a view of sexuality that is at odds with the prevailing and morally insistent Masquerade.  Her struggles to understand her own place in the world, from child to adult, from native to citizen, is a wonderfully empathic exploration of culture and sexuality in a world that condemns people for being born different.  Baru is placed as Other.  Her mind, her gender, her sexuality, her birthplace, her race, all set her apart from the dominant world view espoused by the Empire, and she must succeed regardless.  So an essential element of this story is about the cost of being true to yourself, and the sacrifices we make, the lies we tell, and the masks we wear to conform to the expectations of others and society at large.

But she has a secret.  The empire isn’t the only one that can wear a mask.  She has a plan to defeat the Empire of Masks, and she is committed to it, body and soul.  Sacrifices will have to be made, and she cannot blink.

Just as Baru is committed to her plan, Dickinson commits to this story.  There is an inevitability about what is happening, and, like a good mystery, it all comes down to how the author lands the ending.  Dickinson doesn’t shy away from it and binds himself to that.  It is a brave decision by the author, and one that demonstrates the strength of Dickinson’s convictions.  There are a few moments in the novel when the pace drags a little, and when the odd sentence here or there doesn’t quite ring true.  But in all honesty, these moments are few and far between.  This is a confident and assured debut which is full of great prose, compelling characters, and a commanding story.  I hope that there are many future instalments in this series because I can’t get enough of this world, this story and of Baru herself.

Baru is a complex character, at times cold and ruthless, sometimes happy and passionate, but she has a strength buried deep inside that is an inner core of steel.  Over the course of the novel she changes from carefree child to Machiavellian general, and you believe her transformation every step of the way.  Dickinson makes you care about her victories and shudder at her malevolent tyranny.  Few characters in fantasy, or otherwise, make you plead with the book, with them, to change, to do something different.  Baru is one of those characters that you invest in and cannot look away.  Plans and ploys, schemes and strategies, Baru understands everything in a form of mathematics and accountancy.  She organises everything as figures in a ledger so that they give the balance she wants, be it the subjugation of a nation or the success of a rebellion.  Double-entry book-keeping and field logistics have never been so dramatic or so interesting.  The focus on economics as a fantasy topic isn’t unique to Traitor.  Steven Erikson’s Midnight Tides (2004) contains a storyline concerning the kingdom of Lether and currency manipulation, so it has been successfully done before.  But Dickinson’s story is starker than Erikson’s and is a different take on the situation.  Certainly Baru is no Tehol, and she has no companion like Bugg.

If I had one criticism of the novel, and given how much I liked it you should take this as a very, very minor note, it would be that at times there was an omnipresent grimness to the latter stages and a lack of levity.  Just a couple more moments of even dark humour to break up the mood and grant a little respite to the reader would have been nice.  But Traitor works as a compelling story even without a comic pairing like Tehol and Bugg.  It is its own story.  And this is not a bad thing.

Dickinson has created something that seems to be increasingly rare in fantasy, a truly original vision and voice that are both recognisably fantasy, and yet a story we haven’t read before.  One of the great strengths of this novel is that Dickinson fully commits to telling the story and doesn’t hold back the punches.  Baru is not your typical fantasy hero, Traitor is not your typical fantasy epic, and yet the story is fully recognisable as belonging in the ranks of fantasy greats.