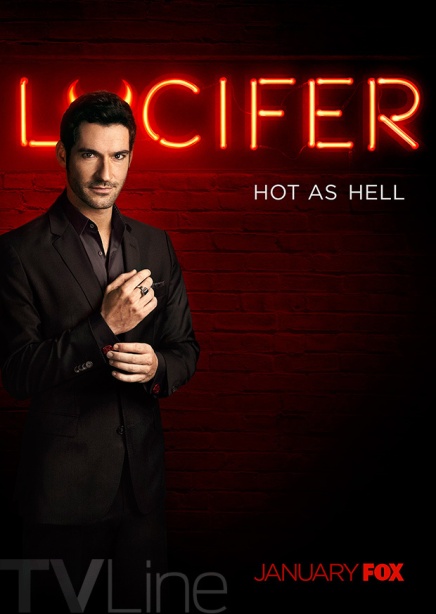 The comparisons between Lucifer and Constantine (CW, 2014-2015) are apt as both are based on DC comics characters, both use a slightly formulaic structure of mystery of the week, attractive-but-morally-dubious male lead and attractive-but-with-a-hidden-past female co-star, and supernatural rather than science fictional frame-story.  In fact in a startling coincidence both shows utilise Welsh-born actors for their male leads.  Both shows also borrow characters and story elements from their respective comicbook-forebears, but deviate substantially from them.  But where Constantine aimed for the down and dirty aspect of the Hellblazer comics, Lucifer tries to appear more suave, elegant and debonair.  It isn’t, but at least it tries to present itself that way.  The major difference between the two comes down to the type of suit and the accent…

Ellis turns in an extravagant performance as the smarmy, arrogant fallen angel with control issues and rampant ego-centrism, and for the most part gets away with appearing sophisticated, educated and seductive primarily because of good tailoring, a rictus grin, and the American belief that upper class English accents make almost everyone desirably charming.  Portraying the devil as a charismatic, vengeance driven good guy is certainly an interesting choice, but the show has been sure to include moments when Lucifer reveals his complete amorality and immorality lest we forget that he is an edgy character and not meant to be a clean cut hero.  Admittedly these have been rather limited and in short supply, and the scenes of Lucifer in therapy to address his Daddy issues and insecurities do little to add to the mystique and threat of the character even if they do provide comic relief and a respite from the investigation of the week storyline.  In fact Rachael Harris’s psychoanalyst character, Linda, is usually a light-hearted moment of fun in the episode.  But it is a strength of Ellis’ performance that he manages to straddle the line between smarm and charm fairly well, and his portrayal of Lucifer’s sheer unadulterated joy in meddling in mortal affairs comes off the screen in waves.  Subtle and understated is not really in the Devil’s playbook.

Lucifer’s main power in the show (apart from supernatural strength and immortality, and stubble that scour a pot clean) is the ability to get people to confess their deepest desires.  While this is certainly a boon for the central police procedural aspect, Lucy (as his brother angel refers to him) seems to have to put quite a bit of effort into the process as a number of people appear to be able to resist him, and he is misled with startling regularity, until he asks the right questions in the closing minutes of the show.  Limiting the power of the character is probably a wise choice for the producers of the show as there wouldn’t be much drama if he could solve every case with a flash of his immaculate teeth and smouldering eyes (in some cases literally smouldering), but so far it has been a little inconsistently portrayed and most of that seems due to the need for dramatic effect rather than any in-universe rationale.

Lauren German plays the tough-but-attractive homicide cop/ex-actress/single mother of an unbearably cute kid, with aplomb and a great deal more subtlety than her co-star.  She manages to demonstrate the disgust that Lucifer’s antics inspire, as well as the pragmatism that realises he is an asset to her investigations, with an earnest believability… at least in some scenes.  The script appears to have her changing her mind about Lucifer a lot, so German is not really to blame for some of the more egregious volte-faces.  However, her scepticism and need to investigate Lucifer ring true and add some minor notes of believability to the show.  But despite being the main audience point of view character, the majority of the show rests on Ellis’ character, not German’s.

Making a comment about believability might seem at odds with the premise of the show outlined above, it is about the Devil after all, but at heart (and most of the rest of the body) it is a police procedural set in the upper echelons of LA with storylines about actors, agents, paparazzi, and stars.  Due to the already rarefied atmosphere of the setting, the supernatural angle of the show, and the fact that the cast is made up of extremely attractive people, a bit of realism or even a nod toward reality is very welcome indeed.

I haven’t mentioned much about the over-arching supernatural storyline.  This is because the two major figures that seem to be involved with it, DB Woodside’s angel Amenadiel and Lucifer’s enforcer/cocktail maestro, Mazikeen (Lesley-Ann Brandt), have barely been in the show and have only made the briefest of appearances.  The vague threats and warnings about supernatural repercussions barely even qualify as hints.  Hopefully, as the series continues, the supernatural elements and the broader cosmic storyline will be ramped up, although this didn’t save Constantine from being cancelled (and a cross over between the two seems like such a missed opportunity given how neatly their storylines would have meshed).  But given that the show is still in its infancy, establishing the dynamic between the two leads, and setting up the foundational world of their investigations, leaving the bigger supernatural aspects to later on could be a very deliberate strategy on the part of the show.

Overall this seems like a supernatural, comics-based show for those people who don’t like comicbook or supernatural shows, as it is basically a slick police procedural with lots of flair and little substance.  It certainly has more in common with Elementary and Bones than it does with the more impressive iterations of comic heroes found in Daredevil and Jessica Jones.  And its fear of showing too much of the supernatural realm distances it from cult favourite shows like Angel and Buffy.  But it is entertaining and watchable, if not particularly engaging or challenging.  I am pretty interested to see how the series develops over the course of the season.