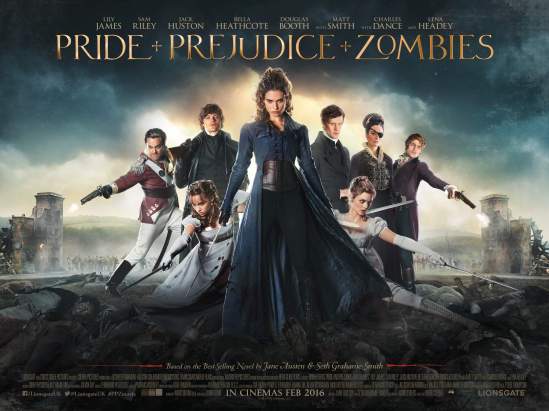 It is a truth universally acknowledged that there are certain people who love Jane Austen’s work, and those that… don’t.  However there are those that are familiar with Austen’s stories (either the novels themselves or the endless BBC period dramas and other filmic remakes) but find them a little pompous, dry, and tedious.  There are also those that find the serious, dystopian horror of modern zombie stories to be a little too horrific and violent.  Good news then, because if this describes you, then Pride and Prejudice and Zombies might be the very compromise you were looking for.

Essentially, England has been beset by a zombie plague.  The country is divided by a great canal with only one bridge remaining linking the two sides of the country.  Despite this, the aristocracy go on with their daily lives of socialising, gaming, courting, and generally acting as if nothing has changed.  Enter the Bennett family.  Mr Bennett is father to five daughters, and his wife, Mrs Bennett, is obsessed with finding the girls good marriages as the estate will pass to the eldest male relative should Mr Bennett die.  Anyone who has read the Austen novel will know immediately where this is going… minus the zombie part of course.  For the most part, the story stays surprisingly faithful to the main events of Austen’s novel (admittedly with zombies thrown in to ‘liven’ things up) and the characters remain the same, although, given the reworking, they are not quite as subtly rendered.  Lizzie is fierce and independent, Jane is beautiful and good, Darcy is churlish and arrogant, Bingley is dashing and a bit wet, Collins is an ass, and Wickham is a bounder and cad of the highest order.  They aren’t exactly rendered with an eye to nuance and understated performances go out the window in a film with Zombies in the title.

The commentary about social classes and snobbishness, as well as the commentary on the privilege of the landed gentry appears occasionally, but all but disappears entirely by halfway through the film as it begins to focus more and more on the romance story of Lizzie and Darcy, engineering the resolution that brings them together, and wrapping up the zombie threat.  But as I said above, subtly is not really this film’s forte.  However, it was a gentler zombie action film, with a great deal more wit than the glib, schlock horror we have become accustomed to seeing in shows like The Walking Dead and Z Nation.  It is something of a relief to watch a film in which the characters don’t drop an artfully rendered quip every time they dispatch a foe, and the lack of pop culture references in a zombie film is surprisingly refreshing.  Although the film is very aware of its silliness and much is done with a subtle tongue-in-cheek relationship to the period material.  There is just a wonderful absurdity of the juxtaposition of the two genres and the film doesn’t shy away from that.  The sight of the Bennett girls primping and dressing for the dance, and also ensuring that their weapons are readily accessible is just glorious.   There is also a scene which concerns the infamous confrontation between Lizzie and Darcy, and rather than simply raised voices, the two duel while discussing their grievances.  Their verbal sparring matched by equally ferocious physical exchanges.  But let’s face it, this is not a subtle film, nor will it ever be regarded as a great cinematic masterpiece, despite that I did find that it possessed a certain charm and was bizarrely entertaining.

If I were to compare this to anything, instead of the obvious comparator Abraham Lincoln: Vampire Hunter (2012) a more apt example might be found in Naomi Novik’s flintlock fantasy ‘Temeraire’  series, because PPZ feels more like a fantastic alternate history than it does an action film that contains supernatural elements.  Where Lincoln went for the unsubtle action movie style, PPZ feels more like a Regency Romance that just so happens to have zombies as a threat, rather than the French.  The fight choreography is nothing special, nor is it a major focal point of the film.  The main element of the story is the Regency Romance, rather than the zombie plague.  So like the setting of Novik’s stories, the film tries to evoke the feel of the novel of manners despite its ‘wartime setting’ and the strange fantastical elements.

But in all honesty, you get what you pay for here and it doesn’t try to hide anything.  This is a silly film that aims at entertainment rather than any deep social commentary.  Don’t expect a high budget action movie, or a violent, dark zombie tale, this really is what it purports to be… Pride and Prejudice… with zombies.