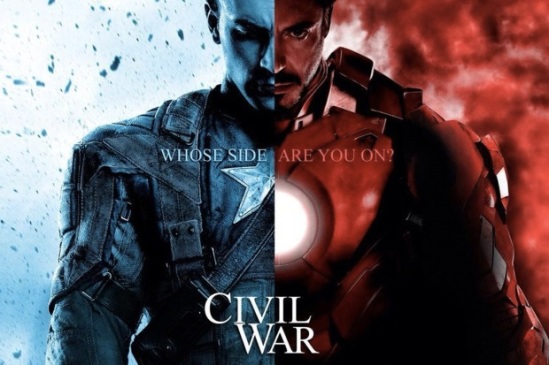 Better than Batman versus Superman Dawn of Justice… but that isn’t saying much.  A looong film filled to the brim with action and fight sequences.  Despite this there are moments of real humour and pathos, and it touches on some important and interesting themes.  All in all a good action movie in the Marvel franchise.

One of my biggest complaints about the Marvel, and now the DC, movies is that they spend a lot of time setting up the next film in the franchise, rather than focusing on the film in front of them.  Basically, they are so obsessed with the big picture that they lose sight of the current story at hand.  While there was a little bit of that in this film (ok more than a little bit), it thankfully felt a lot more focussed on the story being told and wasn’t just adding elements to foreground the next step.  What was even better was that because the characters had been introduced and explored in previous films much of the story focussed on what was happening, rather than trying to shoehorn in more backstory and character history.    It did feel a lot like an Avenger’s film rather than a Captain America story, with the majority of the film falling on Chris Evan’s and Robert Downey Jr.’s shoulders.  But I have to admit that they handled the large ensemble cast pretty well, and although it was stuffed to the gills with characters and fights, there was a real story hiding in there behind the heavy-handed moral lessons, the biased narrative focus, and the occasional plot hole.

The marketing for the film constantly posed the question Team Cap or Team Ironman?  To be honest, as a Captain America film the narratorial perspective was firmly on Cap’s side, and yet both of the sides in this conflict felt wrong.  On the one hand you have Ironman championing UN oversight (as SHIELD is still defunct in the cinematic universe) and command of the Avengers, because we all know that the UN will effectively and efficiently deal with threats in a crisis and it isn’t corrupt and full of politicians with more agendas than the Avengers have had faceless minions to slaughter.  On the other hand you have Cap championing complete autonomy of the Avengers and running it as a private enterprise with no oversight (civilian, military, or otherwise) apart from what they think is best, because private military outfits who answer to no-one are clearly above reproach and will always act in everyone’s best interest.  So we have the billionaire industrialist (and former arms manufacturer) siding with Big Government, and the super soldier siding with private enterprise… I know that is how it is in the comics, but it just strikes me as strange and even back to front in this film.  But it ultimately felt like a choice between a dirt sandwich or a mud pie, both positions were unappetising… and, in all fairness, both Ironman and Captain America were both too stubborn and self-righteous to consider alternatives.  The idiots.

However, Tony Stark’s actions are intrinsically part of a long character development arc that at times has been muddied, but clearly continues here.  His progression from a devil-may-care billionaire arm manufacturer to defender of the helpless has been firmly established and is consistently and heavy-handedly highlighted in this film.  We understand his motivations as the script hits us over the head with a number of scenes in which Tony can appeal to our sense of justice and need for control.  Balancing this is Steve Roger’s arc that has shown the dutiful solider come to question authority, loyalty, and the chain of command, over the films he has been in.  That apparently reaches breaking point here as he sees the transfer of control of the Avengers to a bureaucratic political machine as a mistake as they will never understand the decisions that the Avengers have to make, and being weaselly politicians they will seek to use the Avengers to carry out their dirty work and avoid blame.  I mean, given control of the Avengers, how long would it take the UN to send them in to fight various battles, wipe out enemies and install ‘friendly’ governments in certain countries around the world. Well that isn’t actually the reason Steve ‘Red White and Blue’ Rogers gives.  That would have been an interesting motivation, but Cap’s real motivation in this is to help his old buddy, the mass murdering assassin Bucky ‘The Winter Soldier’ Barnes and to hell with everyone else.

The entire plot is thrown into motion with one of those extremely intricate, long con, style Rube Goldberg villainous plans that beggars belief because it relies on so many things falling the way the bad guy wants them to and is so over complicated and over-engineered and so dependent on information that he couldn’t possibly have or predicted that he is apparently the world’s greatest and luckiest psychic strategic mastermind.  But it is motivated by something that fans and critics have been discussing ad nauseum about the new slew of superhero films: With all that destruction and loss of innocent civilian life, who is accountable?  This central thread as a sort of meta-commentary is then tied into the film with personal motivations by the villain.  However his motivation, and those of the central heroic story are very nice echoes of each other, as Cap, Ironman and, even Bucky, wrestle with what is the right thing to do versus personal desires and beliefs.   So although lacking in nuance or even a real desire to fully explore the concepts, those themes underpin the entire story and lift it above the pedestrian slug-fest that it could have become.  It is actually engaging with this aspect of superhero stories unlike Batman Versus Superman’s lip-service dodging the issue with lines alluding to the central downtown being clear because it was after 6pm or an industrial area just happening to be completely abandoned.  So kudos to Marvel on this score.

In terms of the ensemble cast, sure there were a few rough edges as some new-ish characters were added in, and there were some very noticeable absences, but for the most part there was a nice balance in old hands and new in this.  The well-established characters felt like natural fits in this film as the script never tried to force ‘individual character moments’ and rather found those moments in the ongoing story.  Their interactions felt natural, especially as the directors rightly expected the audience to already know who all these people were, and so they never rammed intimacy down the audience’s throat.  Admittedly I could have done without yet another Spiderman, and the Stan Lee cameos are becoming tiresome rather than running gags (in this instance it was an offbeat comedy moment that cheapened a scene rather than providing a genuine moment of levity).  Plus, to me at least, Paul Rudd’s Ant-Man felt really out of place in this, and the CGI turning Paul Bettany into Vision was distracting and odd (Vision is someone who manifests his clothes and look, why he felt the need to wear non-cgi clothes in some scenes was just unnerving and begged the question why he didn’t make his whole look appear that way).  But Chadwick Boseman’s Black Panther was certainly one of the highlights of the film for me and he gave the character gravitas, strength, and poignancy, so he was a brilliant T’Challa.  I really look forward to seeing more of him in future marvel films.

Despite the silly villainous plot, the actual personal elements of the story and the deeper themes, as well as the overarching meta-commentary on destruction, violence and responsibility, carried the long, long, long action sequences and gave the film a resonance that it desperately needed to break up the almost endless fights.  With the difficult choice placed before the ‘heroes’, for the first time many of them finally felt a human and we get a sense of how they struggle with what they are doing.  It was a surprisingly effective decision on behalf of the film-makers.  The action sequences were very well done, the cgi effects were pretty amazing, the fight sequences were well choreographed and filmed, and there is a lot here for the audience to find entertaining.  Even though it has a ridiculously long run time, you will be glad to hear that numb-bum and restless leg fidgeting were not major issues.

So on the whole, it did feel a little overfull and could have been pared down just a little, at least in terms of fight and action sequences, as this would have allowed more ‘story’, but it was a great Avengers film.  As a Captain America film, some die-hard Cap fans might be a little disappointed as it really feels more like ‘Avengers: Civil War Part 1 – to be continued’, than an out and out Cap film.  But it continues to show that Marvel really has a handle on how to do superhero films well, and throws down the ‘infinity’ gauntlet for DC (did you see what I did there?).  To summarise then: An action-packed superhero fest full of fights, special effects, and stuffed to over-full with characters, but at heart has some decent story going on underneath the CGI surface.  Look past the ridiculous villain storyline and enjoy what is happening on the screen.