Part 2 – Iron Man 2 or Why Character Motivation is Important

During Iron Man 2 there are a number of issues set up that, over the course of the film, the audience is slowly let in on, as pertaining to Tony’s character.  He is slowly being poisoned by the arc reactor in his chest and is dying.  He is concerned about legacy (both his and his father’s).  He fears for the future of his company.  He is also concerned about who will take over the mantle of Iron Man once he is dead.  This fear of the future, and review of the mistakes of the past, is an acceleration and extension of the previous film’s emphasis on Tony changing his ways, rejecting being a weapon manufacturer, and wanting to see a better future.  In all, it makes a lot of sense as it continues the themes of the first film in a natural and logical progression.  However, Tony’s actions in the film, particularly with regard to Ivan Vanko, the ostensible villain, seem to run counter to the established character motivation and contradict the subtext and context developed in both Iron Man and this film.  This forms the crux of where the established subtext and character motivation are ignored in favour of narrative convenience, just as with Jackson’s use of Arwen in LotR.  The important point here is to remember that although much of Tony’s state of mind is revealed over the course of the film, it is meant to be present in his character from the start. 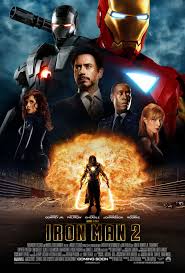 Before getting into the details of this, let us first consider who Ivan Vanko is and how he is presented in the film.  As the MCU films clearly have no difficulty in taking inspiration from the comics but have no desire to adapt specifics or storylines faithfully and are perfectly happy to change, subvert, invert, or discard aspects at will, we don’t need to consider the comic history of the ‘villain’.  This is solely focused on the character created in the film.    Vanko is presented as the angry, bereaved son of a brilliant scientist who co-invented the arc reactor with Stark’s father, Howard Stark.  Yet, where Howard became a multi-billionaire, Vanko’s father was denied any sort of monetary recompense for the invention, thrown out of the country, and died in penury.  Vanko himself is dirty, poor, and Russian.  His hair is lank and greasy, his skin covered in tattoos, and his teeth aren’t the pearly pieces of perfection that are flashed in Tony’s well practiced smirks.  Apparently that is all we need as an audience to believe that he is a polar opposite (at least visibly) to Tony, and that is enough to establish him as a villain.  However, he has a justifiable reason for ‘revenge’ (which is usually the motivating factor for a superhero origin).  His father was not recognised as the co-inventor of the arc reactor, and has been written out of the history books.  He didn’t receive even a fraction of the money that Stark’s father received.  So we are presented with an origin story that in many ways mimics Tony’s journey in the first film.  With minimal equipment he designs and builds an amazingly powerful weapon, just like Tony, from scratch, using and refining the arc technology.  He is doing it, not out of a need or desire for money, but to right a wrong, at least as he sees it.  Again, the traditional revenge motivation of a hero origin and that closely mimics Ton’s own origin in Iron Man.

END_OF_DOCUMENT_TOKEN_TO_BE_REPLACED

Erikson, Star Trek and Beyond

Not so long ago Steven Erikson penned an open letter to Bryan Fuller and Alex Kurtzman, the creative team bringing the new Star Trek series to the small screen.  While the response to this online has varied between abusive and dismissive, to thoughtful and considered, it did raise some issues that go beyond Star Trek itself, and it is that which has piqued my interest.

In his extensive letter (parts 1, 2, and 3, or the whole thing here) Erikson attempts to explain what he believes are some of the core principles behind the success and the longevity of Star Trek: The Original Series, and how the subsequent series of The Next Generation, Deep Space 9, Voyager, and the prequel series, Enterprise, have drifted further and further away from the strengths of the original.  So below I am going to address my interpretation of what Erikson said and how it relates to what I consider a broader trend within SF and TV toward violence and conflict as action, and then, in turn, how that actually relates to a more significant general problem in terms of compromised morality.   Lastly, how I think this is related to a systemic and flawed understanding of narrative by producers and production companies.